Came on some of what were supposed to be copies from early Mormon pamphlets.
They showed Angels with Wings.

L-d$,inc makes a big deal of "no wings" like all the evil other religions show.

Was what I saw accurate on early depictions? Don't have access now or I would go back and check it out.

If accurate - when did the depictions change and the Anti-wing brigade get the upper hand?
Top

Joseph Smith was the main proponent of the idea that angels had no wings. He made a public statement to the affect around August of 1839. It comes in connection with Nauvoo temple teachings. And it doesn't really seem to have been much of an issue prior to that. So it wouldn't surprise me to see many representations of angels with wings earlier (and even through the 1840s - especially among non-Nauvoo groups of church members).
Top

Benjamin McGuire wrote: ↑
Mon May 04, 2020 8:20 am
Joseph Smith was the main proponent of the idea that angels had no wings. He made a public statement to the affect around August of 1839. It comes in connection with Nauvoo temple teachings. And it doesn't really seem to have been much of an issue prior to that. So it wouldn't surprise me to see many representations of angels with wings earlier (and even through the 1840s - especially among non-Nauvoo groups of church members).

Very interesting, Benjamin McGuire. Have you done any work on the cult of angels in Asia Minor? Interesting stuff. I don't know of any ancient representations of these angels, but then I have not dug into the topic much really.
Top 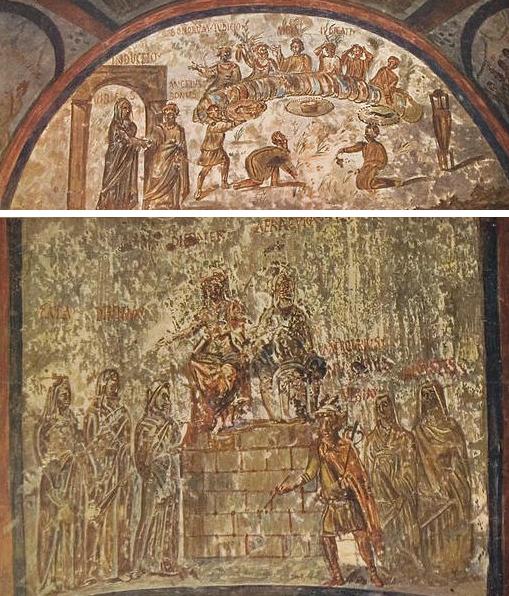 Michael, Gabriel, and Raphael are thought to have wings per Biblical writings, while Moroni and Nephi simply wear togas. Kenny usually wears a parka and was on special assignment to persuade Joseph with his drawn sword. Not much is known about Uriel.

I haven't done much with the cults in Asia Minor. But there is a lot of angel imagery in early Jewish synagogues. For much of the 19th century this was chalked up to Roman influence. But, no one really makes that kind of claim today. Judaism had a strong angelology. And early Christianity had a mixed response to it. The strongest language against it comes near the end of Revelation - 22:8-9. And it probably had some influence on Joseph Smith's Nauvoo period discussions.

8 And I John saw these things, and heard them. And when I had heard and seen, I fell down to worship before the feet of the angel which shewed me these things.
9 Then saith he unto me, See thou do it not: for I am thy fellowservant, and of thy brethren the prophets, and of them which keep the sayings of this book: worship God.

So John tries to worship the angel, and is corrected. This entire concept can be read to fit well with Joseph Smith's view of angels as (former) prophets. We also have the reference (to what we aren't sure) in D&C 128:20. But these ideas along with the Jesus/Moses in the wilderness accounts lead to this idea of confirming angels and rejecting Satan disguised as an angel of light. And so we get in the HoC 3:392, described as the words of Joseph Smith (and this would come in 1839):

"An angel of God never has wings. Some will say that they have seen a spirit; that he offered them his hand, but they did not touch it. This is a lie. First, it is contrary to the plan of God: a spirit cannot come but in glory; an angel has flesh and bones; we see not their glory. The devil may appear as an angel of light. Ask God to reveal it; if it be of the devil, he will flee from you; if of God, He will manifest Himself, or make it manifest. We may come to Jesus and ask Him; He will know all about it."

1 There are two kinds of beings in heaven, namely: Angels, who are resurrected personages, having bodies of flesh and bones—
2 For instance, Jesus said: Handle me and see, for a spirit hath not flesh and bones, as ye see me have.
3 Secondly: the spirits of just men made perfect, they who are not resurrected, but inherit the same glory.
4 When a messenger comes saying he has a message from God, offer him your hand and request him to shake hands with you.
5 If he be an angel he will do so, and you will feel his hand.
etc.
Meanwhile it's incorporation into the Nauvoo temple ceremonies is likely what elevates this within Mormon theology.
Top

Benjamin McGuire wrote: ↑
Mon May 04, 2020 8:20 am
Joseph Smith was the main proponent of the idea that angels had no wings.

Joseph Smith was clear about angels not having wings. Did he ever comment on the idea that angels have penises or vaginas? I'm not aware of any reference to the idea of an angel sporting a penis or, a vagina, for that matter.

So, never mind the wings. I prefer to talk about other parts of the body -- whether spirit or resurrected. What say ye, Ben? When Moroni appeared at Joseph's bedside, his robe was open wherein Smith looked into his breast. Well, could he have simply removed the robe altogether? Would not Smith have feared Moroni's hippopotomonstrosesquippedaliophobia?

Shulem awaits it. I normally talk about these matters down in the Telestial Forum but I am willing to make an exception for you.
Top
Post Reply
7 posts • Page 1 of 1

Return to “The Celestial Forum”