The anything-goes forum for insults, board drama, and interpersonal conflicts. No moderation. Rated R to NC-17.
Post Reply
95 posts

Any guesses on this person’s background and current standing with our Lord?

You might be saying, Bishop Smokey, aren’t you just picking out weird looking people and making fun of them?

The Bible teaches us about physiognomy. The Book of Mormon teaches it. Science textbooks even teach it.

The people you shouldn’t trust the most don’t want you to know about it. They’ve even tampered with our scriptures because of it. Outward appearance will always form around what’s inside. The shew of their countenance doth witness against them.

Of course, the Holy Spirit and your inspired intuition is the best guide, but there are some obvious baselines described in the voluminous texts on physiognomy.

Let’s go over again what some of these are.

With kilos of make-up, camera filters, angles, and re-do’s, they still can’t escape their physiognomy. At least 2 of these women are literally whores.

Our next specimen is a disgusting porn-addicted, chronic masturbater.

Now, considering we’re on a secular Jewish anti-Mormon website, where the Book of Genesis is hate speech and using blue font is a hate crime, I can’t explicitly tell you every single feature to look for without being censored but I always start with the eyes.

My photo editing software tells me this downward angle is over 18 degrees!

The other eye is also dramatically angled. There are a few other areas to pay attention to as well.

The important question is, did you need me to tell you that this man is disgusting? After seeing that face, would you seek out his advice about anything?

Would you be surprised to learn he is here posting “muh Church isn’t true!”

The physique, just like hair color, isn’t really a part of it but this guy is so cringey I had to include it. This is a grown man.

Now, let’s contrast these anti-Mormon specimens with some normal, Christian people and the physiognomy is undeniable.

Can you tell, just by looking, which one is miserable and brings shame on herself and entire family?

Of course you can.

We all know this prominent anti-Mormon.

You may say that’s just an unflattering photo, so here is a professional one.

The good news is, as the Book of Mormon teaches, bad physiognomy can - with God’s help - sometimes be reversed.

Next I’ll give some examples - success stories - of people who became “white and delightsome” with righteousness after being dark, loathsome lost souls.
Last edited by Smokey on Mon Mar 09, 2020 11:25 am, edited 7 times in total.
Dr Shades is Jason Gallentine
Top

canpakes wrote:I think that just adds to my lols. : D 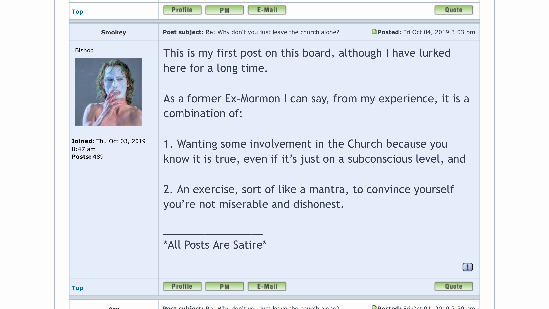 It does. Definitely.
Top

Smokey wrote:Dr. Shades, please note the responses below. Apparently the reporting of my posts are done not out of real concern but for lulz. It seems like you don’t have to take these hair on fire reports of “white supremacy” so seriously after all.

Smokey is nothing if not a good follower.

Lists of Jews in any form on white supremacist platforms is alarming, especially given the ongoing threats of anti-Semitic violence and targeting of synagogues and Jewish organizations. While none of these trolling tactics explicitly calls for violence against Jews, it is impossible to know who might interpret the lists and photographs as a call to action.

It's time for Smokey to receive his Ex-Mormon reward punishment!

Smokey, baby! Come back. We miss you. You shouldn't get so mad. Its a known fact that ugly people lasj out. For better or worse there is a logical fallacy that truth os beauty.
Ugly people aware of their own ugliness therefore lash out at the “system” which sees them as less than.
Its ironic that in many ways it becomes a self fullfilling prophecy. They become as ugly on the inside.
No one who is good can be truly ugly.
You seem to be upset someone has pointed out that your attractiveness is based upon the purity of your soul. We all bear the iconography of our sins. Most wear them openly as badges of honor
Top


Its a known fact

Return to “The Telestial Forum”