The Off-Topic forum for anything non-LDS related that's insulting or not safe for work. Rated R to NC-17. 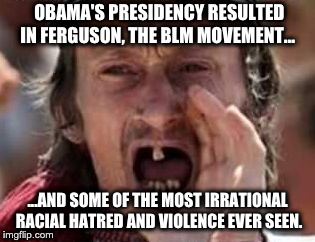 I mean, I get that you are a shallow, sister diddling, garbage racist who doesn't have anything to offer society beyond whatever value you imagine being white gives you but, damn, that is one of the stupidest, most ignorant things I have ever read. That is saying a lot considering the bach-ajaxAdolfHitler-subfaps vortex of sheer idiocy we are treated to on this site, daily. Then again, you revere traitors and losers (being one yourself) and believe that immigrants are coming to take the Double-wide on half acre of land of your "inheritance" so I get that you are kind of a dimwitted ____ but Jesus...

Your ability to ignore the last century of violence committed by cowardly racists and bigots, like yourself, against minorities is staggering. How many people where hung by the BLM movement? Dragged behind a car? Kidnapped and violently murdered or beaten nearly to death because of the color of their skin? What a sad, pathetic "human" you are - no wonder your entire self worth is tied to the color of your skin, you have nothing else.
"your reasoning that children should be experimented upon to justify a political agenda..is tantamount to the Nazi justification for experimenting on human beings."-SUBgenius on gay parents
"I've stated over and over again on this forum and fully accept that I'm a bigot..." - ldsfaqs
Top
Post Reply
1 post • Page 1 of 1